We have an excellent selection of frozen seafood products
that can be shipped today! 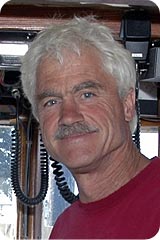 We, Scott Boley, John Wilson and I started what would evolve into Fishermen Direct with some basic goals. To provide the finest wild salmon, crab, albacore tuna and rockfish to the customer for the best possible price. To educate our customers on the seafood they were eating and the fisheries issues that would help keep that seafood available. To increase the profits to our fishing businesses (through the '90s the quality of our products off the boats continued to get better while the dock prices went south).

With our move to the present location in 1998 we added the goals of quality service and a clean facility. Within a few years Dixie Boley became a full partner (she had been integrally involved from the beginning). We always believed with our over 100 years combined experience in the fishing business it would  translate into a successful seafood market.

My first commercial fishing license was issued in 1973. I went salmon trolling in the fall of that year, and the die was cast. Through the '70s I tried a variety of experiences, with most, revolving around fishing. I finished school with a teaching certificate (the original idea was teach in the winter and fish in the summer). Fished on purse seiners, in Alaska, two different summers. Moved to Curry County to learn Dungeness crab fishing. Helped bring a trawler around from Mississippi and fished on that boat for a season. Spent a couple summers salmon trolling on the Oregon Coast. One of those summers on a troller was 1978, with John on his boat  the  "Helen Marie".

The first boat I leased in 1980 could be called a sinker. It didn't take long to realize that I was not going to make a living if most of my time was spent trying to keep the boat afloat. In 1981 I leased the "Deanna Marie" and several years later owned the boat that I still fish today. Sometime in the early '80s I got to know the Boleys. By the mid '80s our three boats, Helen Marie, Frances, and Deanna Marie, had started fishing up and down the coast together. In 1984,after crab fishing with a few different skippers, I started crabbing with John. We would crab together until John sold the boat in 2004. It was a mutually beneficial partnership in that, not only were you working with a friend, but, each of us could count on the other to reliably do their job.My wife, Janice, fished with me in 1987-88. It was pretty good fishing and we had a good time. The rest of my years on Deanna have been solo.

The early '90s saw the cyclic nature of the ocean and salmon decline. To compound the problem salmon farms came on line and were competing directly with our wild salmon. It wouldn't be until well into the next decade that the unique quality of our wild king salmon would be recognized, and a price differential with farm salmon developed. These circumstances would lead directly to the formation of Fishermen Direct. In 1997 we leased space under the Norwester Restaurant and sold our catch directly off the boat. The following year the present location became available and our full seafood market was born. Scott and Dixie had long wanted a seafood market, while John and I were probably more interested in a market for our salmon and crab.

From the outset we all became involved in cleaning and refurbishing what had been, Dick & Casey's seafood market. Early on in the new millennium the helpful staff, that has made our service a hallmark, started to take shape. The Port of Gold Beach embarked on a cannery building remodel in 2002.  It caused a fair amount of disruption and required us dismantling important infrastructures. With mainly Scott's direction, the port did remodel our space into a more efficient and customer friendly environment.

As the last few years have demonstrated the salmon business is not only tied to the normal ocean cycles, but also the problems caused by human interaction with their habitat. The resiliency of salmon is undeniable. I hope to be able to make a living fishing the wild salmon, that Fishermen Direct has built it's reputation on, for many years to come. There are some enormous challenges facing the salmon industry, but we hope in the end the fish win and we can continue to provide you with one of the premium seafoods of the world. Scott worked tirelessly to solve or mitigate the environmental and/or political problems that are driving our business. His death in 2007 was, for me, the loss of a business partner, fishing partner and friend. Fortunately for us and you the customer, his vision is indelibly etched in Fishermen Direct. We hope you enjoy our seafood, especially our local products, as much as we do and continue to let us serve you.

About 11 years, ago three veterans of the Oregon commercial fishing industry sat on the dock facing severe industry problems -- declining prices for their troll caught Chinook salmon, lack of markets for their fish and farmed-raised salmon, replacing wild-caught fish, selling for lower prices and containing artificial dyes.  To top it off there was no place to buy fresh fish or sell commercially caught fish in coastal Gold Beach.